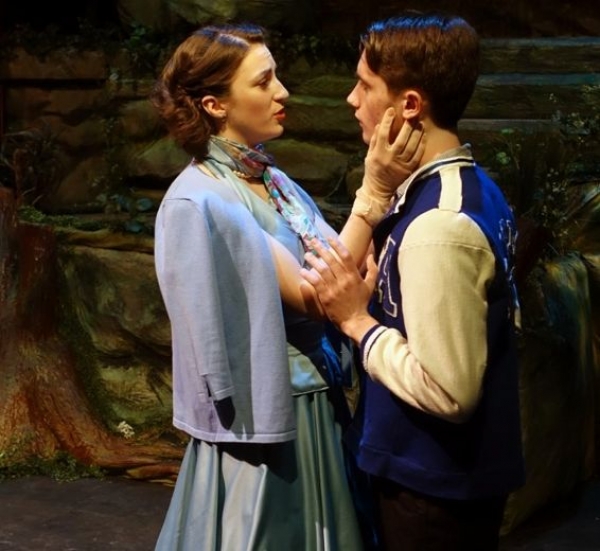 KINGSTON — For its last production of the year, King's Town Players has turned to one of Shakespeare's most enduring plays, A Midsummer Night's Dream.

This time around, the classic comedy of magical fairies, flowers and redirected affections is set in the 1950s rather than the 1590s, when the play was believed to have been first written.

Director Steven Spencer — who also dabbles in film — sets the comedic mood early with some charming black-and-white movie clips as background for the play. It doesn't take long to get accustomed to the actors wearing letterman jackets and dresses.

For those who haven't seen, or can't remember, the play, there are a few different romantic plots revolving around the peace-making marriage of Duke Theseus of Athens and Hippolyta, queen of the Amazons.

The fairies that live in the forest outside of Athens stir up trouble, naturally. To teach his wife a lesson, the king of the fairies, Oberon (Zorba Dravillas), has ordered Puck (Krista Garrett) to have his wife Titania (Nikki Garrett), thanks to a flower-derived concoction, fall in love with a beast, in this case aspiring actor Nick Bottom (Nikolas Yuen), whose head she has transformed into that of a donkey.

And the use of the love spell doesn't end there as it redirects the affections of Lysander (Daniel Pauley), Hermia (Sue Del-Mei), Helena (Natalea Robyn) and Demetrius (James Hyett). Hermia's father wants her to marry Demetrius, but she's in love with Lysander. Helena, meanwhile, is in love with Demetrius.

Also finding their way into the forest are the half-dozen would-be thespians, who aim to perform a play to pay tribute to the new couple. Of course, when their lead actor is made an ass, their production falls apart.

One of the most striking things about this take on the Shakespeare classic is its exquisite set, with faux marble pillars to one side, bushes on the other and a raised tree-framed platform and stairs in the middle. Impressive work.

While the set looks great, it does hinder the play as it juts out and narrows the front of the stage so that, in some scenes, actors have to turn their backs to one side of the audience or the other, making the dialogue hard to hear at times.

With a cast of more than 20, there are some really strong performances, but two in particular stood out for me. Newcomer Nikolas Yuen plays the egotistical yet hysterical Nick Bottom with aplomb, and his expressions are terrific.

Fellow newcomer Natalea Robyn, meanwhile, is mesmerizing as the lovelorn Helena, and the way she fends off her pawing pursuers Demetrius and Lysander is perfect.

As rivals, James Hyett and Daniel Pauley played well off of each other. Stalwarts Krista Garrett, as Puck, and Sue Del-Mei, as Hermia, were terrific as usual.

Dylan Chenier, as Francis Flute, showed some great comedic timing, as did much of the ill-prepared acting troupe, as they performed their play within the play.

While this isn't the best production of the play I've ever seen — that belongs to the one I saw in Toronto's High Park several years ago — it certainly does have its charms, and makes for an enchanting mid-spring's night's entertainment.

A comedy by William Shakespeare.

A King's Town Players production playing at the Rotunda Theatre inside the Theological Hall, 77 Stuart St., on Queen's University's campus. The curtain rises at 8 p.m. from Wednesday to Thursday until May 16.

Last modified on Thursday, 28 May 2015 22:12
Tweet
Published in Media
More in this category: « New stage in troupe's future Lots to laugh about in The Noble Pursuit »
back to top