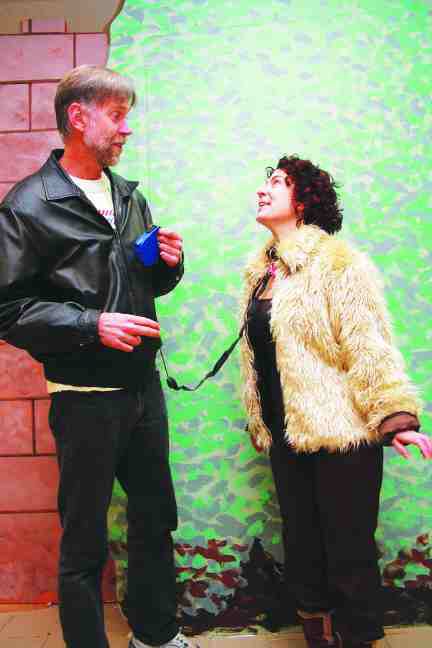 EMC Entertainment - An empty-nest can be a difficult thing to bear - especially when somebody else comes into the picture. But what if that somebody was a real pooch?

The King's Town Players will tackle the themes of marriage, midlife and more this month when they stage the modern romantic comedy Sylvia.

Written by A.R. Gurney, the play tells of a middle-aged couple, Greg and Kate, who relocate to New York after their children have moved away so Kate can resume her career in the education system. Left with something of a void in his life, Greg finds a stray dog, Sylvia, which he befriends and brings home.

"But what makes it really fun is that the dog is actually played by a younger woman," says director Will Britton. "The dog comes in and starts to wreak havoc on their relationship as (Greg) tries to find out where he's going."

Britton explains that while the play is first and foremost a comedy, it is certainly not without substance.

"It's very funny, but it does actually have some meat and potatoes to it as well," he says. "There are some really neat explorations of relationships and self-identification, and all the stuff that one can imagine would go along with the plot."

While it was written in 1995, Britton says that the play is timeless enough to be easily adapted to the present day. Indeed, the one line that would date it a little - a reference to President Bush the senior - can easily be taken as a comment about Bush junior.

"I think it's a really fun, contemporary show," says Britton. It's very accessible to a lot of different people, and I think everyone will enjoy it."

The title role is played by Krista Garrett.

"It's kind of fun," she says of playing a dog..."I get to sniff a crotch or two, and squat to sit, but I don't walk around on my hands and knees."

Physicality, she says, is particularly important when portraying an animal.

"There's that sort of wide-eyed thing that happens with dogs, especially when their masters are there that they love, so there's a bit of that. I guess it's mostly (facial expressions), with a little tail wagging occasionally and things like that."

Garrett explains that the role of Sylvia evolves quite a bit throughout the course of the play, from being very naive and puppy-like to more mature and calm.

"As the play progresses you're not quite sure if she really is a dog, or if she's maybe perhaps someone who's come into their life...like a mistress."

Garrett adds that "there's a progression of the costumes as well. You can see how they go from being (very gaudy and ridiculous in the beginning) to being a little more human."

Britton remarks that directing a human playing a dog hasn't been as big of a challenge as he had assumed it would be. Originally, he says, it was nearly impossible to presuppose what type of dog Sylvia would be and how she would move until they determined who would be playing the part.

"Krista is fantastic in the role and has certainly brought enough to it to make it dog-like that I haven't had to worry too too much about what to do specifically to make it come across," he says.

"Will has been really great to work with, and is really interesting as a director," says Garrett, returning the compliment. "He obviously really loves the piece, and he has a whole lot invested in it, so it makes everybody else want to do right by him."

Sylvia will be performed in a café-style setting at the Kingston Yacht Club, a dynamic that worked well for the Players for last year's Picasso at the Lapin Agile and December's It's a Wonderful Life radio play.

"I really like the intimacy of the whole environment, and it works really well with the script too," says Britton. "It's set up so everyone has the ability to sit and enjoy a drink and have a couple laughs while the show's on, so I think it'll go very well."

Sylvia runs Jan. 10 - 14, and Jan. 17 - 21, beginning at 8 p.m. For ticket information, please contact the Grand Theatre box office at 613-530-2050 or visit www.kingstongrand.ca. For more information about the King's Town Players, please visit www.kingstownplayers.com. This email address is being protected from spambots. You need JavaScript enabled to view it.