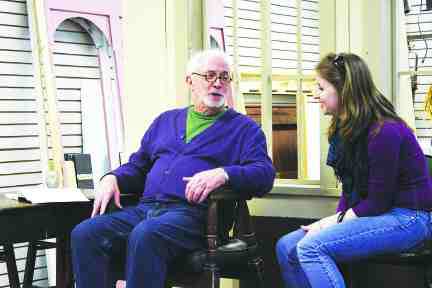 EMC Entertainment - Are you an individual between the age of eight and 17 with a passion for theatre? Are you interested in developing and honing your performance skills? You're in luck. The King's Town Players are gearing up to train a new generation of "Players" this summer through its newly-formed junior and senior drama classes.

"It is part of the mandate of the company, that we provide education so that we can get more and more people involved in theatre. If we don't get younger people involved with theatre, we don't end up with an audience or with actors after a few years," said Youth Drama Training Coordinator Steven Spencer.

Two eight-week classes will be offered to actors throughout the months of May and June. The first, for children 8-11, will focus on movement, voice and improvisation. Games and creative play will be used to increase confidence and creativity, and foster collaboration and communication. The second, for youth 12 to 17, will increase the focus on performance skills and culminate in a play both written and performed by the students.

"They're geared towards people with an interest in theatre and an interest in performing on stage," Spencer said. "We're trying to give them the confidence in order to hopefully be comfortable on stage and be able to go out and audition for things."

Spencer, who will also serve as a class instructor, is a Drama and English teacher. He has worked with various Kingston theatre companies, including Theatre 5, Theatre Kingston, Domino Theatre, Artistic License, In the Dark, Rogue and Peasant, as well as the King's Town Players.

He will be joined by fellow instructor Kara Wilkinson who holds a BAH in Drama and is a recent graduate of the Artist in the Community Education program at Queen's University. In addition, Wilkinson is also a graduate of The Second City Conservatory Program in Toronto, has 12 years dance experience, and has been vocally trained by the Kingston School of Music and Queen's University.

Spencer said both classes will have an emphasis on fun, as the goal is to foster a love of theatre.

"If we look out at our audiences and we see those guys coming back and enjoying theatre, whether it's one of our productions or a production that somebody else is putting on, or if we go to a school and see that kid participating, we'll be happy because we will have expanded the culture of theatre in Kingston," Spencer said.

Both Youth Drama Training Program classes will run Saturdays from May 5 to June 23 at the Frontenac Mall. The junior class will run 10:30 a.m. to 12 p.m., while the senior class will run from 1 p.m. to 2:30 p.m. Program cost is $340 and includes two tickets to the students' final performance. For more info or to register visit kingstownplayers.com.

Before the King's Town players put on their teaching caps, the company will stage David Auburn's Proof April 17 to 29 at the Rotunda Theatre in Theological Hall at Queen's University.

Directed by David Slack, Proof tells the story of Catherine, the daughter of a brilliant but mentally disturbed mathematician. It follows her as she attempts to come to grips with the possibility that she might inherit her father's insanity.

Slack noted that each season the King's Town Players present one classic drama. He chose Proof, which won the 2001 Tony award for Best New Play and the 2001 Pulitzer Prize for Drama, for its writing brilliance.

"It's one of those plays that brings the audience in. The play has several different scenes but in every scene you learn just a little bit more about a character that you didn't know before, which brings the audience in more and more as you move along...the writing is brilliant and it's easy to relate to and I just love the characters."

One such character is Catherine herself, who is played by Sue Del-Mei.

Del-Mei describes Catherine as a very internal character to play.

"In a lot of her scenes she's very closed off to whoever she's speaking to. In that way it's difficult to try and portray these things that she's thinking without having huge speeches and monologues...it's an interesting challenge."

Whether it's Catherine, her father Robert, Sister Claire or graduate student Hal, audience members will find qualities within each character to relate to.

"They have a realism to them that most audience members will be able to relate to," Slack said, adding that he believes Proof is a production that is accessible for all.

"I think it's one that people should come and see...It's one of those shows that even if you aren't an avid theatre goer...you're going to be able to enjoy it."