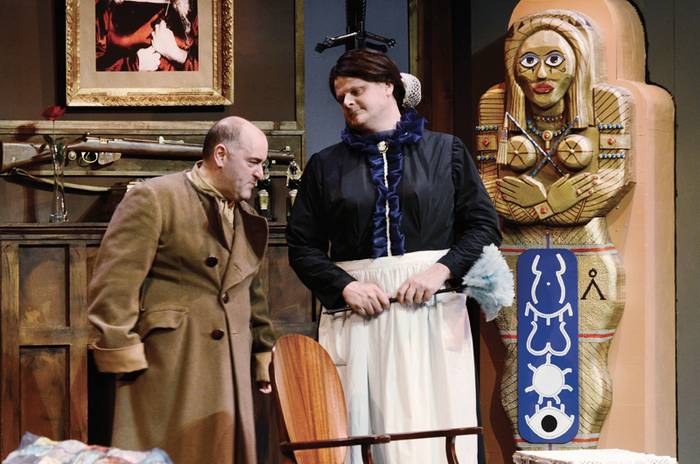 The King’s Town Players bring to life a haunted manor

Queen’s Journal - Resist the urge to whisper questions to your neighbour during The Mystery of Irma Vep, as constant confusion is as much a part of the production as humour and playfulness.

Despite the unexplained forays from Victorian mansions to ancient Egypt, the King’s Town Players’ production of The Mystery of Irma Vep has no shortage of laughs.

The Mystery of Irma Vep was the personal choice for director Amie Elizabeth Bello after another play fell through for the company. She said she fell in love with the play 10 years ago and it was her  mission to one day direct it. Written by Charles Ludlam, the play originally premiered in New York in 1984.

The play is solely carried by two male actors, Clayton Garrett and Steven Spencer, who play all seven characters, ranging from 19th century women to vampires.

The two actors show no fear of physical comedy, dueling with fake flowers and morphing into werewolves without warning. Garrett and Spencer need to be applauded for their courage in this production. It’s  not surprising that each actor required two dressers to help them seamlessly slip from character to character in seconds.

Lady Enid’s stupefied expressions to the mischief around her are particularly amusing. Spencer’s comedic timing when playing Enid is spot on.

To investigate what happened to Irma Vep, the characters take unexpected detours into Egypt and the world of the supernatural to look for explanations. At moments all these plots twists are confusing and  leave audience members wondering how they ended up in an Egyptian crypt. But ultimately over-the-top duels and impressive tricks with fire and blood distract from any plot chaos.

Convocation Hall serves as a personal setting. Even when performed as a run through just hours after moving into the space, it was extremely  impressive. A wide array of props ranging from regal Victorian couches and bookcases to Egyptian mummies and tombs, help create a convincing series of sets. This travel from country to country occurs swiftly thanks to a hardworking crew of volunteers.