All 38 of Shakespeare’s plays and other chronicles performed in one evening? Three local actors set out to prove it can be done. 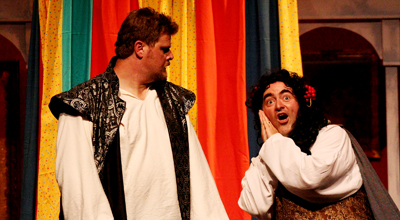 16 comedies, 10 histories, 12 tragedies and 154 sonnets made into a two hour production undertaken by three actors. This is what the King’s Town Players have created with their new play The Complete Works of William Shakespeare (Abridged). It’s a crazy whirlwind of Shakespeare’s beloved works that come together in one hilarious and educational play.

It may seem like an outlandish idea to take some of the most loved and arguably best written works in the English language and make them into a modern production that touches on all 38 of Shakespeare’s plays. However, it’s an idea that became hugely successful in the 1980s with the first ever Complete Works of William Shakespeare, which had a ten year run in London, England’s West End.

Each time the play is re-created it’s re-worked to fit the culture of its time. In this production there were many mentions of Lindsay Lohan’s drinking problems and the vomiting it inevitably leads to.

What’s so lovable about this play is its ability to take Shakespeare’s work and give it that modern twist. And when I say modern twist I don’t mean the cheesy chick-flick way that movies like She’s the Man and 10 Things I Hate About You have done.

The use of the Star Wars and Jaws soundtracks, actors in Converse sneakers and the claim that Romeo and Juliet is just about Romeo wanting to get into Juliet’s pants bring these 400 year old plays into a modern context that young audiences can relate to.

The play is brought to life by three extraordinary actors, Clayton Garrett, Zorba Dravillas and Steven Spencer. These Three Musketeers seem like an oddball grouping, but each bring their own unique talents to the show.

Garrett acts as the older brother figure, often narrating, directing and comforting his counterparts. He is at his best in the re-creation of Hamlet when he plays Hamlet as an intense, emo and slightly tipsy young man, like something out of a soap opera.

Dravillas is the in-between man, often playing the partner in crime to both Garrett, the leader and Spencer, the follower. He often plays the male characters and shared narration roles with Garrett, turning them into sexually charged Prince characters (and I mean Prince the musician, not prince as in royalty).

The real highlight is Spencer who plays the lovable, but idiotic best friend, who runs away at the thought of tackling his role in the infamous Hamlet and thinks Othello, the Moor of Venice is about a man on a boat (a blow-up raft in his case).

While the play is over-the-top, it finds many memorable moments of comedic genius in the way it brings each of the plays to life, such as rapping Othello, having an audience member be the balcony in Romeo and Juliet and turning the histories (like King John and Henry V) into a violent football game.

The best aspect of the production was the improvisation. A standout moment was when they dragged a poor female audience member onto the stage to play Ophelia and had parts of the audience help her get into character by playing her id, ego and superego, the culmination of which resulting in the three actors demanding Ophelia scream at the top of her lungs.

Despite the fact that they criticized my section’s interpretation of the ego, I still laughed uncontrollably as I yelled, "Get thee to a nunnery!"