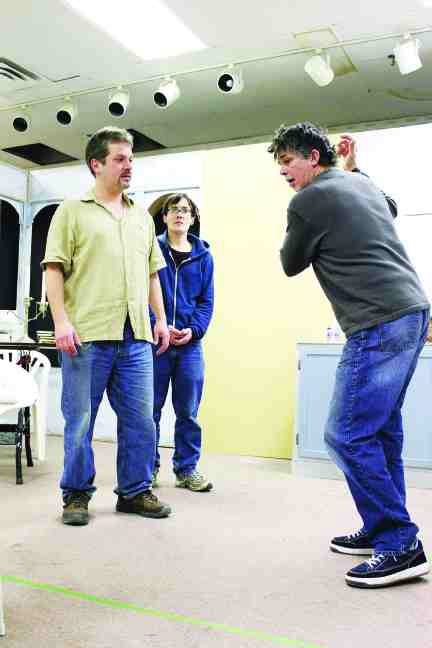 EMC Entertainment - Anyone who has a younger or older brother or sister no doubt knows a little something about sibling rivalry.

That knowledge and experience will surely lead audience members to connect and identify with the character of the King's Town Players latest production, which opens April 12.

For its fourth show of its inaugural season, the community theatre group will tackle Sam Shepard's True West.

Directed by Michael Catlin, True West is a story set in 1980, 40 miles outside Los Angeles. It tells the tale of two brothers: Austin, a successful young screenwriter, and Lee, a petty thief. While house sitting for their mother, the pair's tense relationship becomes apparent when Lee convinces Austin's producer, Saul, to dump his brother's screenplay in favour of one of his own creations.

"(This) makes for conflict between the two brothers. Eventually all hell breaks loose, and then mom comes home and sees the mess," Catlin explained.

Catlin noted that the play is a fusion of comedy and violence, realism and fantasy.

"Some people have described how this play and other plays he's written are kind of like magic realism, they start off in a very realistic way and then over the course of the play they become kind of grotesque or bizarre. Eventually they fuse realism and fantasy."

Catlin said the challenge for he and the cast of Glen Piper (Lee), Zorba Dravillas (Austin), Kevin Fox (Saul) and Antoinette MacDonald (mom), is ensuring they have the right balance. He noted that the comedy and violence come and go in fits and starts.

"I think it will scare and enthrall an audience at the same time, if we get it right."

Although the play is well-known in the theatre community, it might not be as familiar to those among the general public.

Catlin noted that anyone whom he has told of the upcoming performance have been impressed by the undertaking.

"Theatre people all know Sam Shepard... It's an impressive play."

Those less familiar with the understated classic should not be dissuaded from attending the show.

For more information about the King's Town Players visit kingstownplayers.com.