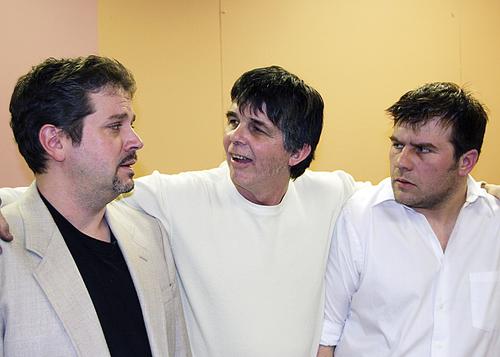 By Martha Tanner Kingston This Week

In True West, the fourth offering of the King's Town Players, now up at the Time to Laugh Comedy Club, acclaimed U.S. playwright and actor Sam Shepard lays bare the dual nature of man. He does it by scratching raw the relationship between two brothers, jealous of each other's lifestyles, rivals for their mother's affection and for their father's esteem.

Austin, a successful screenwriter, husband and father, is housesitting for his mother, hoping that this time away from his family will allow him to polish the script and pitch it to a Hollywood producer. His hopes are dashed when his shiftless older brother, a drifter and petty thief, bullies his way into staying at the house and using Austin's car to scout the neighbourhood for things to steal.

When the Hollywood producer shows up to see Austin's script, he accepts an invitation to go golfing with Lee and ends up dropping Austin's script for one proposed by Lee. Lee ends up banging at the typewriter in frustration while Austin burgles the neighbourhood. At each other's throats, the brothers are forced to cooperate in the creation of a story that will make or break their lives.

Shepard has explained that he wanted to write a play about double nature, "one that wouldn't be symbolic or metaphorical or any of that stuff. I just wanted to give a taste of what it feels like to be two-sided. It's a real thing, double nature. I think we're split in a much more devastating way than psychology can ever reveal."

Director Michael Catlin says he was familiar with the work of Sam Shepard, but didn't know True West until the King's Town Players asked him to direct.

"I read it and loved it," he says enthusiastically. "Shepard is an incredible writer; he writes dialogue so well. You find out about the characters just by reading the dialogue; it's very quick, there are no long monologues."

Shepard has a great capacity for humour and violence, Catlin notes, which makes for an interesting ride. In this darkly funny play, episodes of startling violence are interrupted by moments of jagged humour.

The story draws on Shepard's own experience of growing up in a dysfunctional family with an alcoholic father and with his fascination with the myth of the vanishing West.

Catlin believes that Shepard wrote this play about his father. Although the father is absent in True West, his influence on his sons is painfully obvious.

Catlin has been involved in theatre for three decades in Kingston, both acting and directing. He has worked with many local theatre groups, and most recently directed Pyrenees for Domino Theatre.

Lee is played by Glen Piper of Napanee, an actor with some professional experience. Austin is played by Sean Byrne. Kevin Fox plays the Hollywood producer and Antoinette Macdonald plays the boys' mother.

"Glen really impressed me in the auditions," says Catlin. "He gets really involved in a part and is really committed. In some ways, this part was written for him as the character is very mercurial, going from angry to meek and mild in an instant. It takes a good actor to do that.

"Sean is very laid back. I've worked with him a few times and thought he suited the role."

True West runs until April 23 at Time to Laugh Comedy Club, a licensed establishment. Tickets are $20 for adults, $17 for seniors and students and are available at the Grand Theatre box office. A limited number will be available at the door.