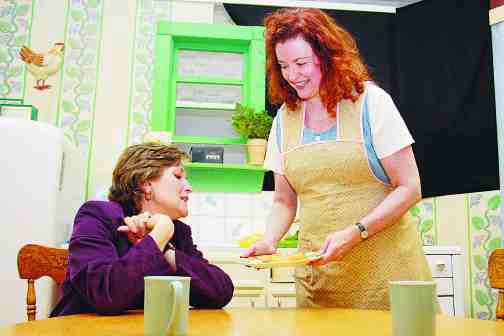 EMC Entertainment - The nature of friendship and the passage of time are important themes in the King's Town Players' latest production, Perfect Pie. Written by Canadian playwright Judith Thompson, the story tells of the reunion of two childhood friends, Patsy and Francesca, who have not seen one another in 30 years.

Now a semi-famous Canadian actress, Francesca's life is very different from her old friend's, as Patsy remained on the land she grew up on and became a farm wife. Over the course of an afternoon, the women discuss old times, most significantly one fateful experience that spurred Francesca - then known as Marie - to suddenly leave her home town at the age of 15.

"There are a lot of things that the play asks you to think about," explains director Sandie Cond. "Judith Thompson's plays always make us look at... the things she thinks go on that people have to work through or suffer through."

The idea of a piece of land, and juxtaposing the experiences of those who remain on it and those who leave, is another important aspect of Perfect Pie.

"There's that saying that goes 'you can never go home again, home is always with you,'" says Cond. "I think that's what Thompson wants us to look at."

At the same time, the director adds that despite the serious subject matter "it's not a really dark, dark play. There are lots of lovely, warm moments in it, and we hope that (it gets) people thinking about friendships and the things that are important."

Anne-Marie Pap, who plays Francesca, explains that emotional intensity gradually builds over the course of the play.

"When you first see someone after a long period of time it's light-hearted and you try to talk about nice things," she says. "And yet there are 30 years of occurrences (since the friends have spoken) so there are discussions about people they knew that have passed on and that sort of thing."

"Plus, there's the whole reason for Francesca's leaving which the audience doesn't know (until the end)," adds Barbara Bell, who plays Patsy. "It was a cataclysmic event that precipitated that 30-year separation and had grave consequences."

"Just the whole concept of moving back and forth between the memory scenes and the present I think is going to be very engaging for the audience, because they're always going to be wondering what will happen next," says Pap.

She explains that the audience ends up seeing several versions of the same story, as not only do Francesca and Patsy have different perspectives on certain events, but the passage of time has also taken a toll on how each woman remembers them.

"They'll have a certain take on what happened with maybe the wisdom of hindsight or the distortion of memory... and then you'll see it acted out and you'll see the young people as it was happening, and it may not be exactly the same as we remember it or tell it."

As a result, Bell explains that an important aspect of rehearsing the play for her and Pap involved learning the roles of the younger versions of their characters, and trying to understand exactly what it was like to live through those initial experiences.

"I think it's going to be interesting (for the audience) to watch the two representations of (our characters at different ages) and see how as actors we've unified them so it rings true in a way that young Patsy connects with mature Patsy, (etc.)."

Bell says that Cond has been a key figure in helping the actors fully flesh out the characters in this way.

"Sandie gives us so many really concrete exercises and ways to think about the characters, and she asks challenging, pivotal questions," she says, noting that the actors have been consistently asked to consider the inspirations behind what their characters say and the things they do.

Cond is quick to return the compliment, noting that "this has been a wonderful group to work with. They have lots of discussion and input, (and are very open to trying things different ways)."

Perfect Pie runs at the Rotunda Theatre at Queen's Theological Hall June 14-18 at 8 p.m. There will also be a 3 p.m. matinee on June 18. For ticket information, please visit www.kingstownplayers.com or www.kingstongrand.ca.