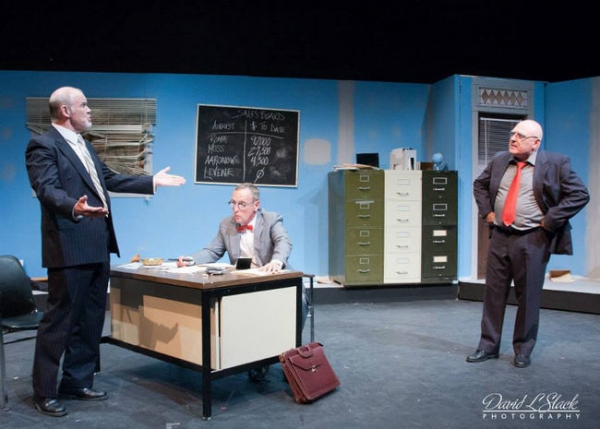 KINGSTON - After three seasons of holding their rehearsals and performances wherever they could find a roof over their heads, a local theatre company has finally found a place to call home.

Now all it has to do is pay for it.

The King’s Town Players was formed as an independent, privately funded company in 2010 by Kevin Fox and Myriam Beaulne to complement the city’s existing theatre troupes.

“They wanted to start something different. It was something they always wanted to do,” said Steve VanVolkingburgh, one of the seven partners who currently make up the theatre group.

“I think they had the idea of bringing different types of shows. Everybody’s got their own following and they just wanted to try something else. They did want to open up other opportunities.”

They hold open auditions for their shows and rely on volunteers for the backstage work, such as the lighting, sound and costumes.

But the players never had their own theatre space, so over the past three years they have performed in sites that range from the Grand Theatre to the Rotunda Theatre to Convocation Hall to Domino Theatre. One show was held inside the downtown library. They even do a show at the Kingston Yacht Club, “a cool little venue.”

“We are on the move, which is difficult for our attendees, that’s for sure,” said VanVolkingburgh. Regular patrons have to pay close attention to find out just where the next play is going to be.

But the company finally has its own space.

The group has just acquired an upstairs area at 506 Days Rd., in the La Salle Park Plaza. It’s a space originally used by a karate club.

“This is a big step for us, getting our own place we can sort of call home for now.”

To pay the rent for the space, the group launched a fundraising effort. The month-long drive, called Keep the Lights On, started Sept. 5 and will end at midnight on Oct. 5. So far, it has raised just over $2,800.

“We are really pleased with that,” said VanVolkingburgh.

“That will give us four months’ rent.”

The private company gets no grants or subsidies, so it depends entirely on donations.

The online campaign allows donors to pick a level that ranges from $10 up to $1,000, “or whatever people can give.”

Different perks are also offered, depending on the donation, ranging from free tickets to a walk-on performance in a play.

VanVolkingburgh said the players are delighted they have finally found a place of their own. They are currently using it for rehearsals and as studio space.

“We have been in somebody else’s backyard until now. So it’s really nice and we are excited.”

The room will also be available for other theatre groups if they need rehearsal space, he said.

That co-operation with the other theatrical groups in town has been a major part of the King’s Town Players over the years, said VanVolkingburgh.

Everybody in the company has done shows with the other companies in town.

VanVolkingburgh started off in musical theatre, doing Kinsmen shows, and performed with Domino Theatre for awhile.

“I started late. I never had the nerve in high school. I did my first show when I was 33,” he recalled.

Since then, he has performed in numerous musical shows, including West Side Story.

“I was kicking in the chorus.”

In his other life, he is a laboratory instructor in the civil engineering department at Royal Military College.

“That’s the other beautiful thing about theatre, the variety of jobs that people have in their real life. The scope ranges from dishwasher to university professor. It’s really neat. And everybody with a common love of theatre,” he said.

The players’ current show is Glengarry Glen Ross. It opened inside the Queen’s theological building on Friday night and returns to the stage Saturday night, as well as playing from Wednesday through Saturday next week. All performances begin at 8 p.m.

The online campaign can be found at www.indiegogo.com/projects/king-s-town-players-keep-the-lights-on-fundraiser.

Last modified on Sunday, 13 October 2013 22:07
Tweet
Published in Media
More in this category: « Lady and a Vamp Kingston play combines Shakespeare, grunge music »
back to top