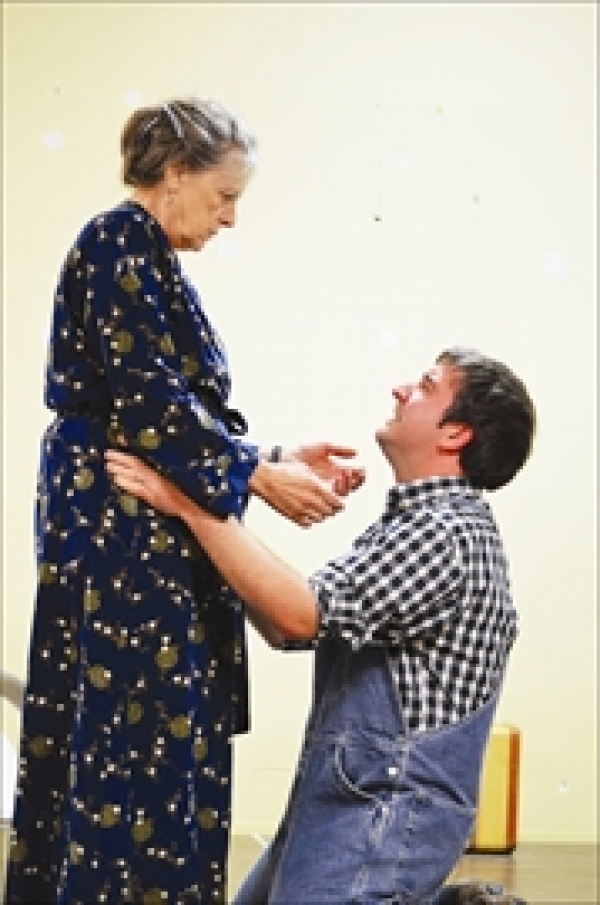 Sandie Cond and Ben Hudson rehearsing their roles in The Stone Angel. The play runs from March 25-29 and April 2-5 at the Domino Theatre. Steve Spencer
By Mandy Marciniak, Kingston Heritage
March 27, 2014

Hagar Shipley is at the end of her life. She has fought death for a long time, but now as she lies in a hospital bed, she reflects on her life and the choices she made.

"The play is really about Hagar's last day of life basically," explained Sandie Cond who plays the role of Hagar in The Stone Angel, a play adapted by James W. Nichol from Margaret Laurence's famous novel. "There are really only three parts where we are in real time throughout the play and the rest of it is focused on her memories, dreams and on her working through how she got to where she is."

Cond, who actually taught the novel for many years when she was a high school teacher, loves the character of Hagar and was excited to finally play her on stage.

"Hagar is one of the most clearly drawn characters in literature. She is really three dimensional and extremely well developed. I loved her because she is human and she recognizes her foibles eventually and I really love her stubborn nature."

For director Frances Berry, the character of Hagar took hold of her too. Berry read the novel when she first moved to Canada from England in 1970. Although she was young, she identified with this older, stubborn woman. When King's Town Players approached her recently about directing the play version of the novel, Berry was delighted to take it on.

"I was just grabbed by The Stone Angel. I like [Laurence's other famous novel] The Diviners too, but it didn't grab me in the same way that The Stone Angel did. It was a little strange because I was pretty young at the time and the novel deals with an older woman and why I related to her I still don't know, I just did."

Both Berry and Cond have won Ontario Drama League (ODL) awards for their recent work in both acting and directing and they are hoping to bring some accolades to King's Town Players too. This production of The Stone Angel will be entered into the ODL awards this year and is actually the first time King's Town has entered the competition.

Berry is sure that the play will be a success regardless, and she attributes most of that to the seasoned actors she has been able to work with. Her directing role has felt less like work

this time around and more like observerving. The play has been a bit challenging in terms of its structure, but she is confident that it will all come together.

"The play is very true to the novel and a lot of Hagar's speeches are taken directly from the novel," explained Berry. "The play also flips back and forth between the past and present, just like the novel, and that is a little challenging on stage. The play is all about memories and that makes it a harder to convey at times."

John Geddes, who is taking on the role of Hagar's father, just hopes that people will come out and let themselves be open to a unique live theatre experience.

"I think it is great to encourage people to come out and see live theatre. People are used to cinema and big movies, but there is something very unique about live theatre," explained Geddes. "Every production of a play and every performance of a play is very different. Live theatre lets the audience really connect with the play and they can see it in real time. I would really encourage people to come out and see it just for that reason."

The Stone Angel runs from March 25-29 and April 2-5 at The Domino Theatre. Tickets are $20 per person and are available at www.kingstontheatretickets.com or This email address is being protected from spambots. You need JavaScript enabled to view it. . Limited tickets will be available at the door.