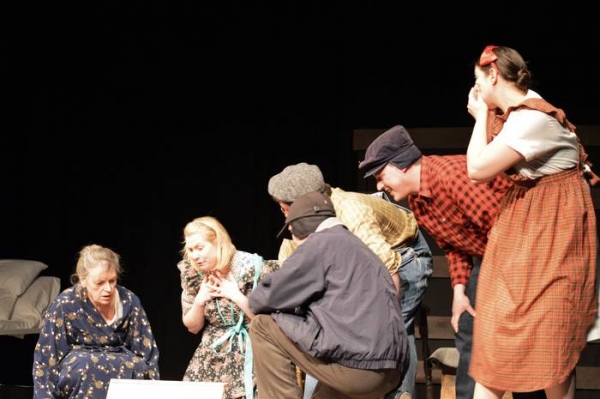 As a 90-year-old woman whose days are numbered, Mrs. Shipley remembers a life lived in obstinate pride and loss.

Based on Margaret Laurence’s novel, The Stone Angel by Canadian playwright James W. Nichol is the story of Hagar Currie Shipley.

Set in the fictitious town of Manawaka, Manitoba, the story alternates between present and past. In the 1960s, when the play takes place, Shipley is facing the indignities of old age and death; in the past she transitions from a child to a lovestruck young woman, to a new bride, wife and mother. The medium-sized stage appears busy with props used for a number of places and times, things like hospital beds, a park bench, a rocking chair, and a dining set. Together they make up a childhood home and a family home, in the past and present, and a nursing home. At times it is slightly unwieldy working with such a full stage.

To populate the stage there is Father, Mr. and Mrs. Shipley, their two sons John and Marvin, and a slew of supporting characters. The large volume of characters and limited actors requires vigilance from audience members or else they risk confusion.

In contrast, stage lighting and music were kept to the bare basics. Lighting consisted of either soft white or yellow full-room light, or a halo spotlight. At its most complicated, there is lightning for the rainy scenes.

Prior to the start of the show “Love Farewell”, “Whitsun Dance” and “Love Farewell” by Scottish singer Isla St Clair set the nostalgic tone. There are two a cappella songs during the play but otherwise dialogue is front and centre.

Actress Sandie Cond plays Shipley and transitions quickly, but ever so subtlety, from old age to the various versions of her character in her youth. It’s easy to believe the different ages and maturity levels she portrays.

In a great monologue by supporting character Murray Lees, played by actor Jason Bowen from Glengarry Glen Ross, the audience is wrenched by the tragedy of a negligent wife and the loss of a young son in a fire.

The play delves, sometimes unexpectedly, into darker themes and scenes such as non-consensual sex, alcoholism, infidelity, premarital sex and death. Thankfully, these are contrasted with lighter scenes and laughter — especially since the play is about two-and-a-half hours in length.

The play is, in its own way, and quite beautifully, a Canadian tribute. There are delightful mentions of Manitoba, a Mountie, Toronto, a ruthless winter storm in which a horse named Soldier is lost, and repeated “Ehs”.

In the end, a woman 90 years of age has lived a long life and faces death with humour, no regret and the thought of peace.

The Stone Angel holds in its endless intricacies a few precious gems that are worth the trouble for anyone willing to let a story unfold in its own time.

The Stone Angel plays at the Domino Theatre March 25-29 and April 2-5.