A new take on a beloved Shakespearean comedy 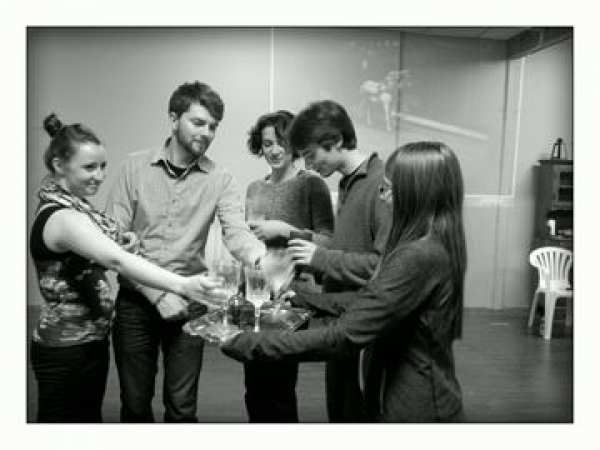 The cast of ‘A Midsummer Night’s Dream’ rehearses at the Kings Town Studios. The show runs May 6-9 and 13-16 at the Rotunda Theatre.

Events – A Midsummer Night’s Dream is one of Shakespeare’s most well-known comedic plays. It’s a tale of whimsy, love and lust and is set in an idyllic world - which in the case of the latest King’s Town Players production, is the 1950s.

“I think that time period suits the play really well,” said director Steven Spencer. “It is after a war where there is a lot of reconciliation and it is also a time when we think of the young and innocent moving away from repression. The costuming is also fun for that era, so that helps.”

Spencer has directed off and on for the past 10 years and has acted throughout that time too. He is an admirer of plays and how they are staged and he loves taking on a production and seeing his vision come to life.

“It is nice to get in and play with the things that you always thought you could do better or that you could make work better,” he explained. “You never know how it will turn out, but that is exciting.”

As an actor, Spencer has performed in a number of Shakespeare productions, but the first one he felt really connected to was A Midsummer Night’s Dream.

“I am a long time Shakespeare fan and they are always big, epic plays that are interesting to take on,” he said. “I’ve seen probably a dozen productions of this play over the years and I thought it would be fascinating to explore and direct.”

Spencer’s vision is the play set in the 1950s. He has incorporated this theme into the sub plots of the play and he has chosen to take separate tones with each one.

“I wanted to play up the very comic subplot of actors putting on a play and create a sort of parody of the actors,” he explained. “We tried to make the story of the young lovers as romantic and teenage as we could and then the story of the fairies we’ve tried to make it as magical as it can be. Hopefully it all comes together and works.”

The play has been challenging at times because it features a very large cast, but Spencer hopes each character stands out on stage. He has also worked to incorporate a lot of physical acting with singing, dancing and clowning; for 18 year old actor James Hyett, who plays Demetrius, this has been the best part of the production.

“I love doing all of the physical stuff in this play. There is a scene where everyone loves everyone and we all fall all over each other and that has been really fun to be part of,” he said. “I love the whimsy of this play too, it’s very infectious.”

Taking on a Shakespeare play is never easy for an actor, but Hyett has enjoyed the challenge. He has played the parts of Romeo and Ferdinand in previous productions, but taking on Demetrius was a little different.

“He is one of the four lovers in the play and he is a bit of jerk,” explained Hyett. “I am used to being more sincere and it has been hard to shake that. I had to learn to be more harsh and while that is difficult it is also pretty fun.”

Hyett encourages people to come see the show and its innovative approach to a classic.

“Steve has done a really good job and the play is really funny and entertaining. It all fits together really well. I think audiences will really enjoy the production.”

King’s Town Players production of A Midsummer Night’s Dream runs May 6 – 9 and 13 – 16 at 8 p.m. at the Rotunda Theatre, Theological Hall, Queen's University. Tickets are $20 per person and available online at www.kingstonboxoffice.com or at the door.

Last modified on Thursday, 28 May 2015 22:57
Tweet
Published in Media
More in this category: « New stage in troupe's future Kingston playwright thinks new and improved production is ‘better than ever’ »
back to top