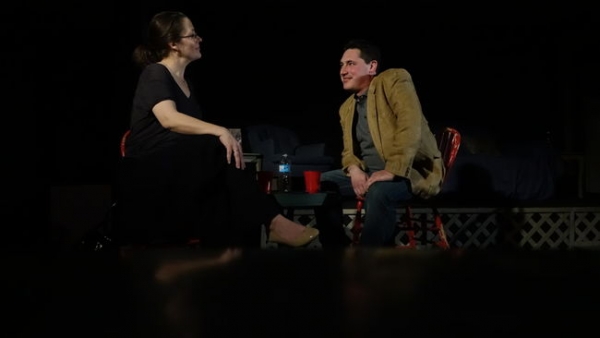 The play, which debuted in 2012, examines feminism from the perspective of three generations of women. The script by award-winning playwright Gina Gionfriddo, who writes for both television (House of Cards) and stage (Becky Shaw), is thought-provoking and laden with one-liners.

The two main characters, Catherine and Gwen, went to grad school together. After school finished, Catherine Croll (Helen Bretzke) went on to become a celebrated author, writing about feminism and the role of pornography in pop culture, and now lives in New York City, where she teaches.

Catherine has returned home to care for her mother, Alice (Susan Hazel), who has suffered a heart attack. Alice provides the older generation’s perspective, the “why-buy-the-cow-when-you-can-get-the-milk-for-free” train of thought.

And finally there’s Avery, the 20-something college student who babysat the Harpers’ children before being fired.

Catherine returns and starts teaching a summer course in feminism, for which there are but two students: Gwen and Avery.

The course, taught in Alice’s living room over a few martinis, launches the discussion about feminism’s evolution in earnest, from its beginnings in the 1970s with Betty Friedan and Phyllis Schlafly to today.

In all, weighty topics are discussed, revelations made.

The strength of this production is the cast, as one would hope.

I particularly liked the performance of Jennifer Verardi as 20-something Avery Willard, who represents the younger generation of thinking. She showed great timing in delivering each of her zingers, of which there were plenty.

As Catherine, Bretzke was really good, too, and transitioned seamlessly from a stiff academic to relaxed teacher.

Bello’s Gwen was spot on, too, as was Hazel’s Alice. Bowen’s Don was appropriately slippery.

The set is spare, without even a picture in the frame, but that is of little consequence as it’s the words that drive the play.

The intimate setting of the Kingston Yacht Club makes it feel as though you’re a part of the discussions taking place in Alice’s living room. During the lengthier exchanges, director Krista Garrett does a good job of having the characters deftly move around the stage.

While there was the occasional glitch on the night I was there — flickering lights, a few longer than expected pauses, a couple of stumbled lines — it didn’t diminish my enjoyment of the play, or the discussion of its subject afterward.

A play written by Gina Gionfriddo.

A King’s Town Players production playing at the Kingston Yacht Club, 1 Maitland St., until Jan. 31. The curtain rises at 8 p.m. from Thursday to Saturday.

Last modified on Thursday, 28 May 2015 23:27
Tweet
Published in Media
More in this category: « New stage in troupe's future Santa Claus: The Panto appeals to kids, adults »
back to top