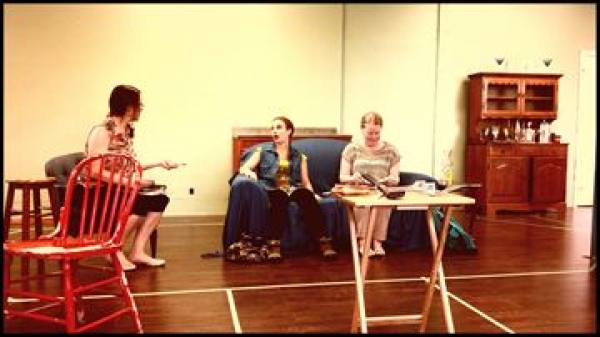 Events – For some, as soon as the word ‘feminism’ is brought up ideas of lectures and dull conversation immediately emerge, but a new play from the King’s Town Players (KTP) hopes to change that response. The play is called Rapture, Blister, Burn and looks at the different life paths of two women who were once very connected.

“They were college roommates and one chose a career in academia while the other chose a family and staying home to raise her children,” explained director and one of KTP’s founding members, Krista Garrett. “The play brings them together a number of years later and looks at the differences in their lives in a very comedic way.”

The play also digs into the ideas of feminism and the choices or lack of choices women have when they are making life decisions. Garrett really connected to the main themes of the play and she hopes audience members will too.

“The play focuses on how everything is grey and not black and white, especially when it comes to feminism. There are so many viewpoints and the play looks at those viewpoints and at how things change as we age. The decisions we make as women in our 20s are quite often very different than decisions we make in our 40s or our 60s, and none of those decisions are any more or less right than the others.”

Garrett was excited to take on the play, written by Gina Gionfriddo, especially since she hasn’t directed a play in almost five years.

“I directed the inaugural show for KTP but haven’t since then. Part of our mandate at KTP is to make sure that we are inclusive rather than exclusive and in that vain I would more often than not put forward outside directors for our shows, but this one I really wanted to do.”

The show also marks an annual return to the Kingston Yacht Club, an intimate and less conventional venue, but one that Garrett hopes will work well with the play.

“The yacht club is great because the audience is very close and it also has sort of cabaret feel because you can have some drinks and enjoy the show. It is not the usual style theatre and I think that laid-back nature works well with this play.”

Above all, the play is a comedy and Garrett encourages people to come see it for that reason. She hopes that the comedy will bring some light and warmth to Kingstonians during a very cold and dark time.

“I would encourage people to come out for an evening of laughter during this cold month. We all need a break from the cold and I think the play will also prompt good conversation and discussion and that is always great.”

Rapture, Blister, Burn runs from Jan. 21-24 and Jan. 28-31 at 8 p.m. at the Kingston Yacht Club. Tickets are $20 per person and available through www.kingstonboxoffice.com or, in limited quantity, at the door.
Last modified on Thursday, 28 May 2015 23:11
Tweet
Published in Media
More in this category: « New stage in troupe's future King’s Town Players bring holiday hilarity with Santa Claus the Panto »
back to top