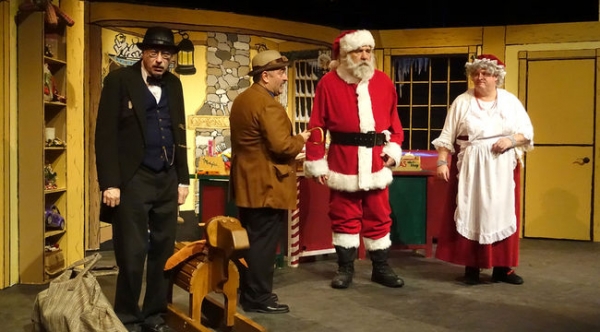 KINGSTON — I have to admit it felt pretty good to boo the actors onstage. That they encouraged me to do so made it all the better.

That audience interaction is part of the charm of King’s Town Players’ seasonal offering, Santa Claus: The Panto, now playing in Convocation Hall on the second floor of Queen’s University’s Theological Hall.

A panto, for those who don’t know, is short for pantomime, a form of musical theatre started in 1700s England that is typically based on a popular fairy tale with a particular twist in casting (more about that later). The audience’s presence is not only acknowledged by a few of the actors, but they are also asked to take part.

This particular panto has local flavour to it, as Richard Linley, who plays Santa Claus in the production and a ringer for Kris Kringle, also wrote the script and substituted his own lyrics of popular Christmas songs.

The plot of Santa Claus: The Panto goes something like this: Dr. Fiendish McAwful (Steven Spencer) and his henchman, Eyesore (Dick Miller), attempt to ruin Christmas by replacing gifts with lumps of coal, and it’s up to Santa, his wife Ostentatia (Peter Lovett), their daughter Sandra (Sue Del-Mei), the elves, a talking reindeer and wayward pilot Kevin (Daniel Pauley) to thwart the dastardly duo’s nefarious scheme.

As you can probably guess by the description above, this production is aimed squarely at children, but, like those old Bugs Bunny cartoons, there is another layer of humour for the older generation, too.

So, to offer a young person’s take on the play — they are the target audience, after all — I asked sister and brother Lily and Owen Park, 10 and nine years old respectively, to join me (and their mom, of course) on opening night Wednesday.

Lily, who sat on the edge of her seat most of the show and happily booed along with everyone else, was particularly fond of Lovett’s turn as Mrs. Claus. She thought it was hilarious that she was played by a man — casting a man in a woman’s role is traditional part of pantomime, and is the aforementioned twist — and that he would sing in a much lower voice when no one was around. I couldn’t agree more.

Owen was a little more restrained when it came to participating in the play. His favourite character was McAwful’s assistant, Eyesore, who sported thick glasses, an English accent and a limp (that sometimes changed legs). He laughed even more when his mom explained why the character was called Eyesore.

Even though both of the kids started to tire in the second act — they not only had a full day at school, but arrived at the show right after their swimming lessons, after all — they both seemed to enjoy it.

As for me, well, my favourite was Steven Spencer as McAwful. His comedic timing was spot on.

I also thought James King and Noelle Piche were engaging as the dim-witted stable elves Stoop and Scoop, while Del-Mei as Sandra and Pauley as Kevin were also strong.

In fact, there wasn’t a weak member in the cast, and I couldn’t help but smile at the youngsters — whose parents, no doubt, comprised the bulk of the opening-night audience — who were cast as elves.

And the set was colourful, simple and, importantly, functional, and to have live musical accompaniment simply enriched the experience.

If I were to change one thing, it would be to yell at the actors a little bit more because, as I said, it felt really good and put me in the Christmas spirit.

An English pantomime written and directed by Richard Linley.

A King’s Town Players’ production running in Convocation Hall, on the second floor of Queen’s University’s Theological Hall, until Dec. 6, with shows Wednesday to Saturday at 7 p.m., and matinees on Saturdays at 1:30 p.m.

Last modified on Thursday, 28 May 2015 22:33
Tweet
Published in Media
More in this category: « New stage in troupe's future A new take on a beloved Shakespearean comedy »
back to top